As promised I am finally managing to show you the Easter bonnets I made for My boys. The preceding years they made it themselves but were disappointed that they never won. it was always the most complicated Easter bonnet who won and let’s be honest the kiddies never touched it. So i thought this year I would help a little. Having a Lego fan and a dinosaur fan we came up with those ideas:

For my Eldest a massive lego hat: 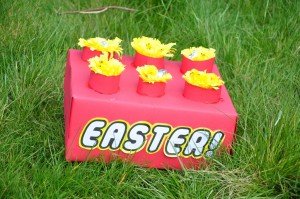 i used a shoe box and covered it with red paper, I then cut 6 strips of red paper to make the little holes on the top. We filled them with crepe paper and glued some chicks on them. We used foil to make some shiny eggs.

I used the Lego font I found  on the net and wrote “happy Easter” on each side of the bonnet. 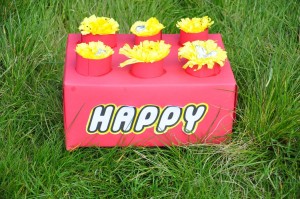 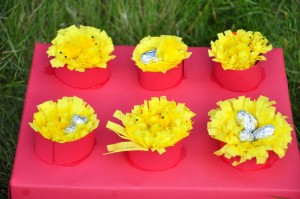 To fit the shoe box on his head I twisted some news paper and taped it to the inside of the box: 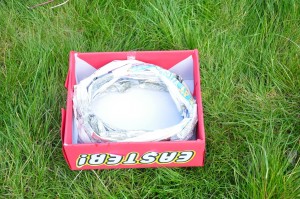 That was one happy customer! now For my youngest I had to really rack my brain to finally come up with a dinosaur egg: 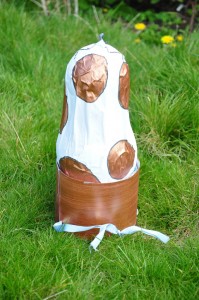 I blew up two small balloons taped them on top of each other. I then mixed PVA glue with a bit of water, tear up some news paper strip and stuck them on the balloons. I let it dry, painted it white and made it spotty. 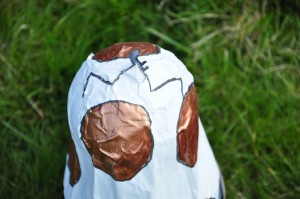 I draw a crack on the top and stuck a tiny dinosaur through a small hole on the top (not really to scale, but he had to wear it on his head so it coul’d be too heavy!)

I attached a ribbon at the bottom 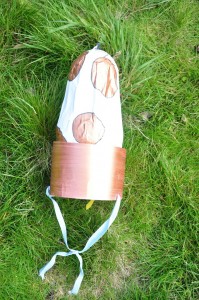 OK so they didn’t win, but they took part and enjoyed parading their hat at school! maybe next year!